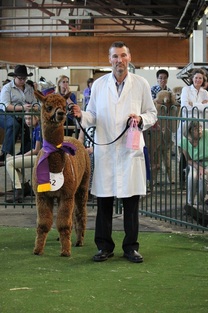 IAR:  182004
DOB:  11/03/11
Sire:  Benleigh Inti's Gold
Dam:  Double-H Jill
Colour: Light Brown
Jullian is well-bred and is a keen worker. He was successfully shown as a youngster, and now has his progeny doing well in the show ring.. Here are his show results from 2013:

Fleece test results for Jullian are: